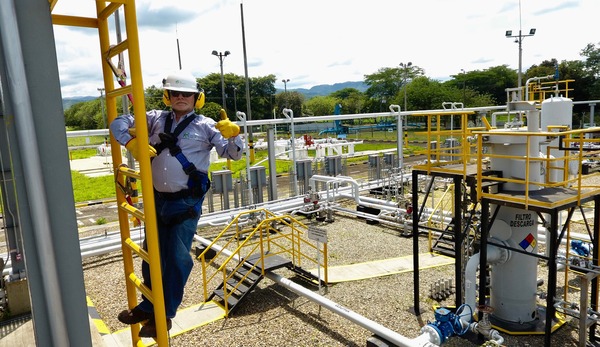 Cartagena, April 10, de 2019.- The CEO of Grupo Energía Bogotá, Astrid Álvarez, presented a set of initiatives to guarantee natural gas availability in Colombia and continue the massification process for this natural resource, which leads to considerable benefits in competitiveness, air care and citizen health.

The proposals were presented at the Twenty-Second Naturgas Congress of Cartagena with an aim towards increasing gas reserves, as Colombia currently has reserves for 11 years.

To begin, Ms. Álvarez highlighted the need to increase the flexibility of the regulation governing the gas transport and supply capacity in the country, meaning a better relationship between all agents so they can access natural gas in the most convenient terms and conditions and facilitate the competition with alternative energy resources.

Then, she emphasized that exploration conditions for conventional and non-conventional sources must be improved in order to guarantee and increase reserves, as well as the number of national bid participants.

She continued affirming that there is a need to improve coordination between production and transport so demand can grow through the timely incorporation of supply projects and the corresponding transport works. On this subject, she stressed the following: “the sector needs sufficient and timely information to make decisions regarding the construction of new infrastructure to avoid installing redundant gas pipelines, referred to as gas connection pipelines, which ultimately affect the sector’s competitiveness.”

Subsequently, she discussed the country’s opportunity to connect the minor fields to the existing natural gas transportation infrastructure. Likewise, she stressed the need to facilitate the entry of associated gas.

Then, she addressed the needs of the Buenaventura Regasification Plant, which is part of the projects approved by the National Government to guarantee supply and reliability to users. In this sense, she emphasized: “Grupo Energía Bogotá, through TGI, supports the project and will participate in the public bid to develop the regasification infrastructure in the Colombian Pacific.” She added: “This infrastructure complements national supply, especially for the thermal sector, which will be able to receive a flexible product that covers its needs. In addition, it complements national production and transport, protecting the system from unexpected events or infrastructure maintenance.”

In this context, she specified that countries such as China, India and Indonesia have a reserves vs. production factor of around 40 years and have installed regasification plants to complement national production.

Subsequently, Ms. Álvarez spoke about the need to allow for the most competitiveness and innovation possible in this area, promoting equity in the treatment towards all actors in the energy chain by reviewing integration rules and eliminating regulatory asymmetries. In other words, making sure everyone plays according to the same rules to guarantee users’ wellbeing and more competitive prices.

She stressed the importance of the joint actions taken by the gas chain in Bogota, which allowed for the presentation of a competitive bid for the renovation of Phases I and II of Transmilenio; thus, the mass transport system will boast articulated and bi-articulated buses that comply with Euro VI emission standards.

Finally, she invited the different agents of the gas chain in Colombia to continue bolstering the use of this resource currently reaching 9.3 million residential users and used by thousands of industries and businesses, as well as thermoelectric plants and the oil sector. Today, over 550,000 vehicles are actually NGVs.

Transportadora de Gas Internacional S.A. ESP –TGI-, a subsidiary of Grupo Energía Bogotá, is the biggest gas transporter in Colombia with nearly 4,000 kilometers of gas pipelines, serving the most populated areas of Colombia such as Bogota, Medellín, Bucaramanga, the Coffee Production Region and the Plains’ foothills. In addition, it operates and maintains the largest gas pipelines network in Colombia and provides natural gas transportation services to the countryside.