TGI opens its offices in Bogota 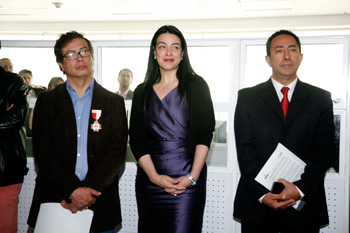 As Ms. Fonseca, CEO of GEB stated, the process of moving TGI’s offices in Bucaramanga to Bogota is part of the strategy undertaken by Grupo de Energía de Bogota to consolidate the group as one of the most important energy groups in Latin America, thus the importance of working hand in hand with its affiliate companies.

“We are pleased with the success of this transfer process.  It will allow us to make steady progress in our purpose of making TGI a world-class company.” Ms. Fonseca further stated that “these significant steps will help prepare us to properly address and respond to growth and expansion challenges the Group will face in the future.

GEB’s CEO highlighted that this transfer and the relocation of collaborators from Bucaramanga to Bogota focused on a comprehensive strategy involving respect for our collaborators, strategy which was highly accepted by them and their families, who have also shown a deep sense of belonging to the company, openness to change and growth and development opportunities for their professional careers.

According to Mr. Ricardo Roa, President of TGI, out of the 368 direct jobs in the company, 133 were transferred to Bogota and eight were relocated in 7 districts where the company operates. Mr. Roa expressed “the transfer process began on 3 May and after approval from the Board of Directors, granted on 31 May, we were

able to implement the entire process, which had the accompaniment of specialized firms such as Human Capital and COOMTGI”.

Currently, TGI is the largest gas transporter in Colombia, servicing the most significant and fastest growing market; its gas pipeline has an extension of 3,957 kilometers and its capacity is in excess of 730 MCFD (million cubic feet per day).  Likewise, the company has twelve Compression Stations, seven in the Ballena-Barrancabermeja gas duct, four located in the Cusiana-Vasconia-Mariquita-Cali gas ducts and one station in the Mariquita-Neiva gas duct.

One of the most outstanding aspects of TGI is its financial soundness. In 2012, it reached operational income of COP702billion, and as of June 2013, the figure grew to COP421 billion.  Similarly, the company announced that it would undertake investments amounting to around USD25 million in two substantive projects, which will increase the availability of natural gas in the country.  In this line of thought, TGI maintains its commitment of continuing its contribution to national development through constant improvement efforts and optimizing its gas pipeline, which will in turn will benefit the sector and all users.

Grupo Energia de Bogotá is the leading corporation in the Colombian power sector. Through EEB it transports electricity to the most significant markets in terms of demand and size in the country, in addition to controlling the largest natural gas carrier in Colombia, TGI S.A. In Peru, its company CONTUGAS has a 30-year concession for the transportation and distribution of natural gas in the Ica Department, while CALIDDA is in charge of natural gas distribution in Lima and Callao.  In that same country, together with ISA, it holds stocks in REP S.A. and TRANSMANTARO S.A., which operate 63% of the electricity transmission system in said country. In 2010, it established TRECSA - Transportadora de Centroamérica S.A.- that is building the most important infrastructure Project in Guatemala and will render electricity transmission services as of 2013. Furthermore, it holds an investment portfolio in the most important companies in the electric power sector, in which the following stand out, CODENSA S.A., EMGESA S.A., GAS NATURAL S.A., la Empresa de Energía de Cundinamarca - EEC and Electrificadora del Meta, EMSA and to a lesser extent ISA and ISAGEN.