Bogotá, November 5, 2014.In ordinary session held on October 29th 2014, Transportadora de Gas Internacional S.A. ESP (TGI) General Shareholders Assembly, Empresa de Energia de Bogotá’s subsidiary, approved the project for the distribution of profits, amounting COP 516,532,363,0610,  corresponding to the release of an occasional reserve and 100% of the distributable profits in the period between January and August 2014, according with the following information: 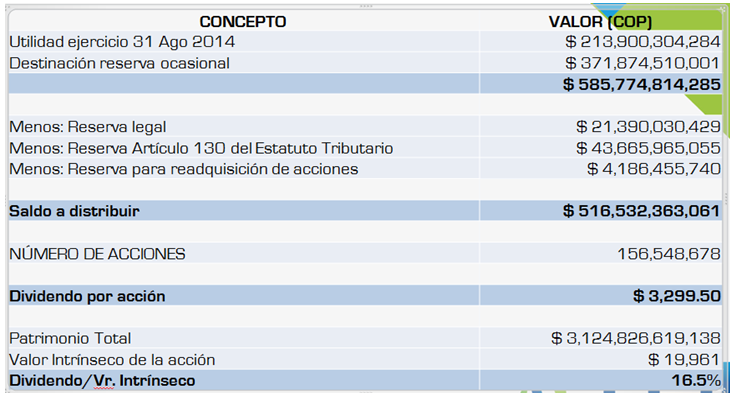 Dividend payment will be made on November 18, 2014. It is worth to mention that on July 2nd, EEB closed the purchase transaction of the 31.92% of the company that was in ownership of The Rohatyn Group (TRG) , former CVCI-, through the purchase of the special purpose investment vehicle, Inversiones en Energia Latino América Holdings, S.L.U., IELAH, domiciled in Spain, through which TRG maintained its investment in TGI. Once the transaction was completed, EEB direct and indirect participation increased to 99.97%.

Grupo Energia de Bogota is the leading corporation in the Colombian power sector. Through its headquarters, Empresa de Energía de Bogotá – EEB, controls nine affiliate companies and directly undertakes electric power transport activities in Colombia, in a market which enjoys the most significant demand in the country.  In terms of the electricity chain in Colombia, it participates in the distribution of electric power through Empresa de Energía de Cundinamarca – EEC. In addition, it controls the largest natural gas carrier in Colombia, TGI S.A. In Peru, its company CONTUGAS has a 30-year concession for the transportation and distribution of natural gas in the Ica Department. Likewise, with its company CALIDDA it distributes natural gas in the regions of Lima and Callao. In that same country, together with ISA, it holds stocks in REP S.A. and TRANSMANTARO S.A., which operate 63% of the electricity transmission system in Peru. In 2010, it established TRECSA - Transportadora de Centroamérica S.A.- in charge of building the most important infrastructure Project in Guatemala and will render electricity transmission services as of 2014. Furthermore, GEB has a portfolio of investments in important companies in the electric power sector in which the following stand out, CODENSA S.A., EMGESA S.A., GAS NATURAL S.A., PROMIGAS S.A., Electrificadora del Meta (EMSA) and to a lesser extent in ISA and ISAGEN. As of 2013, the Group renders advisory and engineering services in Guatemala and Peru through its affiliate, EEB Ingeniería y Servicios. At the same time, in 2014 it incorporated Empresa de Movilidad de Bogotá SAS E.S.P., an affiliate dedicated exclusively to the development of electricity mobility projects.